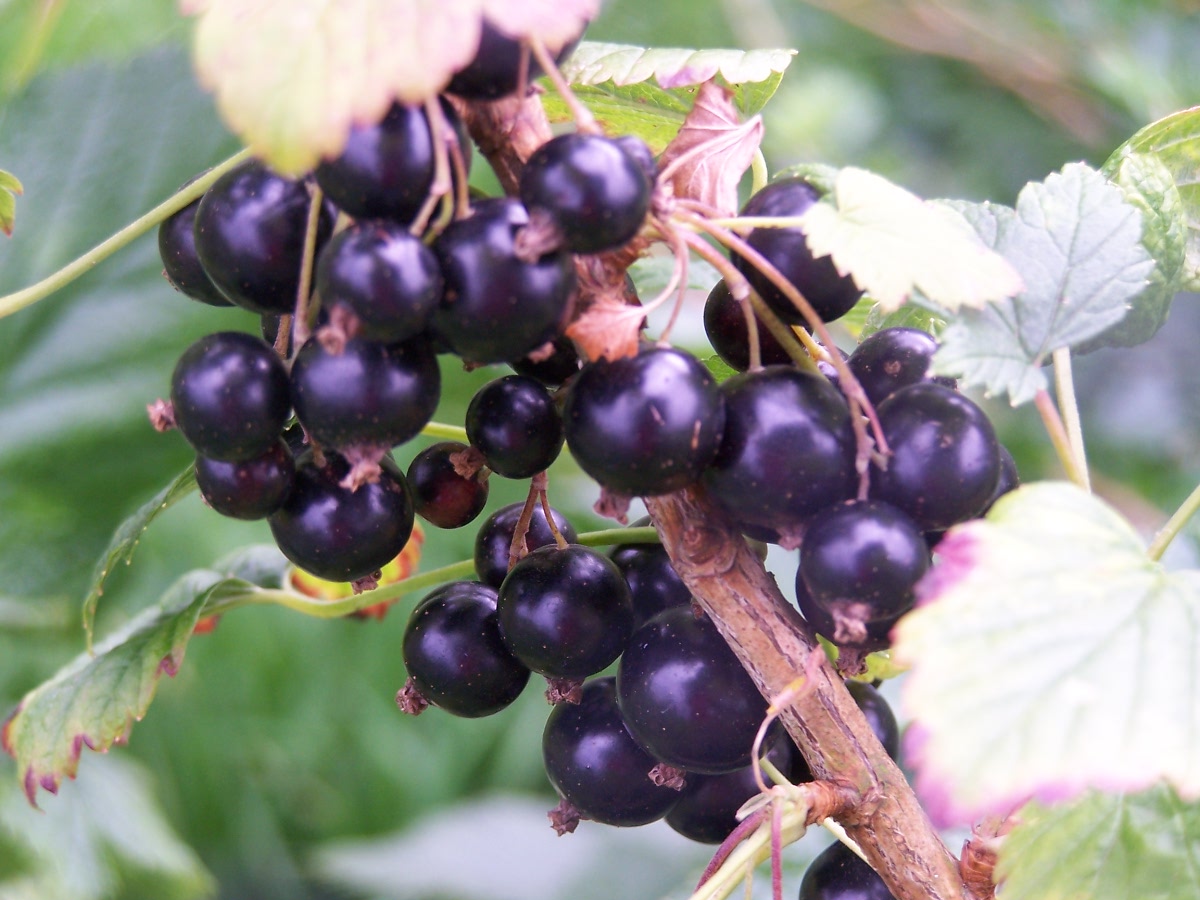 Blackcurrants are a quintessential part of any soft fruit garden. My favourite time on the nursery is in the last weeks of June and early July when the potted blackcurrant bushes are smothered with long tresses of fruit and I eat my fill while out watering, returning to the office with my fingers stained ink purple.

Pity, then, our American cousins – a recent study has estimated that 99% of Americans have never tasted a blackcurrant, as they were banned from cultivation for over a century. In the late 1800’s, there was a huge need for pine for timber to keep pace with the rapid industrialisation taking place. American nurseries couldn’t keep pace, so started importing pine saplings from Germany. Unfortunately some of these imported pines were infected with a devastating disease called White Pine Blister Rust. The problem for blackcurrants is that they are a host plant for pine blister rust – indeed the disease needs a blackcurrant (or gooseberry) to complete its life cycle. In the early 1900’s timber was a much more economically important crop than currants, so the federal government took drastic action – existing plantings of currants were destroyed and blackcurrant production was outlawed in 1911. It wasn’t until the early 2000’s that a farmer in New York State successfully lobbied to have this ban overturned and blackcurrants are now cultivated in the States, but on a very small scale.

The best time to plant is between November and March, when we have a good selection of bare root plants for sale. You will find them for sale as potted plants all year round and in theory you can plant these any time throughout the year, but as with most plants I would avoid planting during the hot dry days of June, July and August. All text books will recommend that after planting you prune the plant back almost to soil level. This is to allow the plant to establish a good root system. However it does mean that you sacrifice any hopes of a crop in the first year, as blackcurrants fruit almost exclusively on one year old wood. If you prepare the soil well (incorporate plenty of organic matter, as well as a small handful of Growmore or blood, fish and bone) and are able to keep the plant well-watered and weed-free, I would recommend leaving half of the stems intact after planting, in order to get a small crop in the first year. Generally allow 1.5m of space per bush.

As mentioned above, blackcurrants produce all of the fruit on one year old wood, so once a branch has fruited, prune it back to just above soil level. This can be done at any stage in late summer or autumn after fruiting, but you can also combine picking and pruning – cut off the fruiting stems when you want to pick the fruit and you can take the sprigs off while sat down on a bench or at the kitchen table. It makes this slightly fiddly task much easier!

New shoots will be produced each year around the outside of the plant, which will produce fruit the following year. After several years you can end up with a plant which has a hole in the middle, shaped almost like a ring donut. Plants are reasonable long-lived, so should crop well for ten to fifteen years. They respond well to a high nitrogen feed in early Spring (mulches of well-rotted manure are ideal), followed by a high-potash feed in late May.

Birds are probably the gardener’s biggest problem – blackbirds seem to have developed a liking for the fruit here on the nursery, and I have to fight them for the juiciest currants. Netting is the only sure-fire way of stopping this, but make sure the netting is secured at ground level otherwise the birds will find a way in.

Big bud is the disease most people have heard of, but it has become less prevalent in recent years due to the introduction of resistant varieties. It is caused by a mite which distorts the dormant buds in late winter, making them look much larger than normal. The plant will then put on little or no new growth, and growth it does put on will not produce fruit. Unfortunately there is no remedy, so you would be best advised the dig the plant out, burn it, and replant a resistant variety in a new position.

Aphids can cause problems in Spring –they seem attracted to the highly scented foliage – but in reality they cause little damage to the plant and certainly don’t affect fruiting. The easiest remedy is to throw some old washing up water over the plants once a week – the soft soap solution will wash the aphids off the plant.

Mildew can sometimes be an issue, especially on thinner, drier soils. Drought at the roots is the cause, so keep your plants well-watered and a mulch of manure will help enormously.

There is no point scouring catalogues looking for a ‘heritage’ blackcurrant. All the Victorian varieties have been replaced by more modern strains and with good reason – an intensive post-war breeding programme, particularly in Scotland, has resulted in newer varieties which are far more productive and disease-resistant. The only one you are likely to find is ‘Baldwin’, but even this is only useful as a curiosity – the fruit is decidedly tart and it crops poorly in areas prone to late frosts.

Ben Sarek – the variety to choose if space is at a premium. Compact growth means it can be planted at 1m spacing. The plant may be small, but the currants are large and have a fine flavour. Frost and mildew-resistant.

Ebony – produces probably the sweetest blackcurrants of all. Heralded as the first dessert blackcurrant, hey can be eaten fresh straight from the bush even by those who find normal currants too tart. Good crops of large currants, but can be susceptible to big bud.

Malling Jet – a favourite variety. Crops late, producing fruit well into August, and as it flowers late tends to miss the spring frosts. The extra weeks that the fruit take to ripen produces currants with exceptional flavour. Highly recommended!