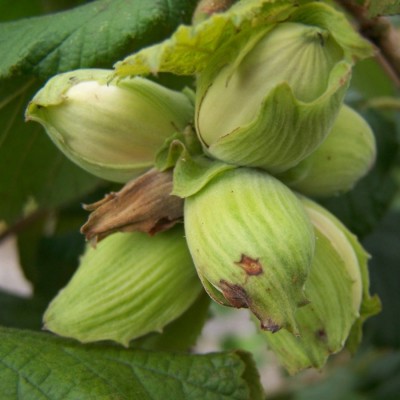 Filberts are named after the 7th Century French abbot St. Philibert of Jumieges. His feast day, 20th August is at the time filberts are starting to ripen.

The hazelnut is revered in Gaelic mythology for giving wisdom and inspiration.

In 1995, archaeologists discovered evidence of large-scale hazelnut processing on the island of Colonsay, Scotland, thought to be 9,000 years old.

Hazel rods were commonly used for water divining, or ‘dowsing’. This practice probably originated in Germany in the early 1500’s.

Nutella, the popular hazelnut spread, was invented in 1946 in Piedmonte, Italy. Cocoa was in short supply post-war, but the area is famous for hazel production, so an early version called Supercrema was sold as a chocolate substitute. Today, 25% of the world’s crop of hazelnuts is used just to produce Nutella.

Hazel is the name given to any member of the Corylus family. There are 18 different species, which are spread across much of the Northern Hemisphere. The nuts from all of these are edible, but we will be concerning ourselves here with the two members which are native to Northern Europe – Corylus avellana (cobnut) and Coylus maxima (filbert). Although there is a slight difference in the shape of the nuts, the terms are generally interchangeable – indeed, one of the most popular varieties, the Kentish cob, is actually a filbert!

Hazels will tolerate a very wide range of soils and sites – they will pretty much grow anywhere. However they tend to produce lighter crops on heavy, damp sites, so add a little grit or washed sand if your planting site is on the moist side. They do extremely well on poor, stony or sandy soils, where other trees would struggle.

Left to their own devices, they naturally grow as large multi-stemmed shrubs, which make an ideal windbreak. You can keep them under control by pruning. The method I prefer is to remove a little of the oldest growth completely during the winter months, cutting back to ground level. This stops the centre of the plant getting too congested and has the added benefit of providing superb hazel rods for peas, beans or sweet peas to grow up the following summer. If you remove just a little every winter (say 20%), it leaves enough older growth to provide a crop but keeps the overall height of the plant down, as none of the stems are more than 5 years old.

You can combine this with the traditional summer pruning method called “brutting”. By hand, bend the longer side-shoots of this season’s growth until they crack, but don’t snap off – you leave the broken section hanging on. This allows more light into the centre of the plant, and encourages more female flowers to form.

The other option is to grow as a single-stemmed small tree, much like a bush apple or pear tree. To do it this way, you will need to remove suckers from the base of the tree every winter.

All hazelnut trees are monoecious – they bear male flowers (the long catkins) and female flowers on the same tree. They are not reliably self-fertile, so to ensure good crops it is best to plant two bushes (although any common hazel in a nearby hedge will work very well for pollination). It is also worth remembering that they are wind-pollinated rather than fertilised by bees, so plant trees reasonably close together and in blocks rather than rows – this is the same principle as for growing sweetcorn.

The only major problem to worry about if you want to grow hazel nuts are grey squirrels. Just as you start to look at the lovely green fruit in mid-August, deciding when to start picking, squirrels will be doing exactly the same thing and beat you to it. If they are a problem in your garden or allotment, there is very little you can do, other than be prepared to share your harvest. If you are growing the trees as single stems, you can put tall aluminium tubes on the trunk to keep them away from the nuts, but this is rarely practical for the home gardener. Siting trees in the open and away from other trees helps – squirrels will hesitate to cross open ground for fear of being too exposed. If you own a dog, all the better!

Kentish Cob – one of the best for the home garden. Superb flavour, heavy crops and hardy.

Gunslebert – quite a new variety, which produces larger nuts than some of the traditional sorts. Highly recommended.

Butler – an American variety, which is very popular with commercial growers. Quite a vigorous plant, producing great crops.

Cosford. Excellent flavour and with a thin shell, these are very high quality. Not quite as heavy to crop as some others.

White Filbert – also known as the Spanish Filbert, this is an excellent choice for growing in the north of the UK. Produces reliable crops of white skinned nuts, with a super flavour.

Purple Filbert. Highly decorative purple foliage. The nuts are smaller than most others, but with a superb flavour.

The Turkish hazel, Corylus colurna, is the largest species of hazel and makes an imposing tree when mature. Native to an area from the Balkans in the west through to Northern Iran and the Himalayas, it has a lot to recommend it – very hardy, great for thin, infertile soils, and it doesn’t produce suckers so grows as a single stem specimen tree, reaching up to 15m at maturity. The nuts are edible, and have a flavour similar to a European hazelnut. A very ornamental tree, and although perhaps a little too vigorous for most gardens, its ability to withstand air pollution and poor soils means it is growing in popularity as a street tree in urban settings.

A cross between the Turkish hazel and the European hazel, which seems to have inherited the best bits of both parents. It grows as a single stem, non-suckering tree, but produces heavy crops of large nuts at quite a young age. Not reliably self-fertile, however, so needs another hazel nearby for pollination.