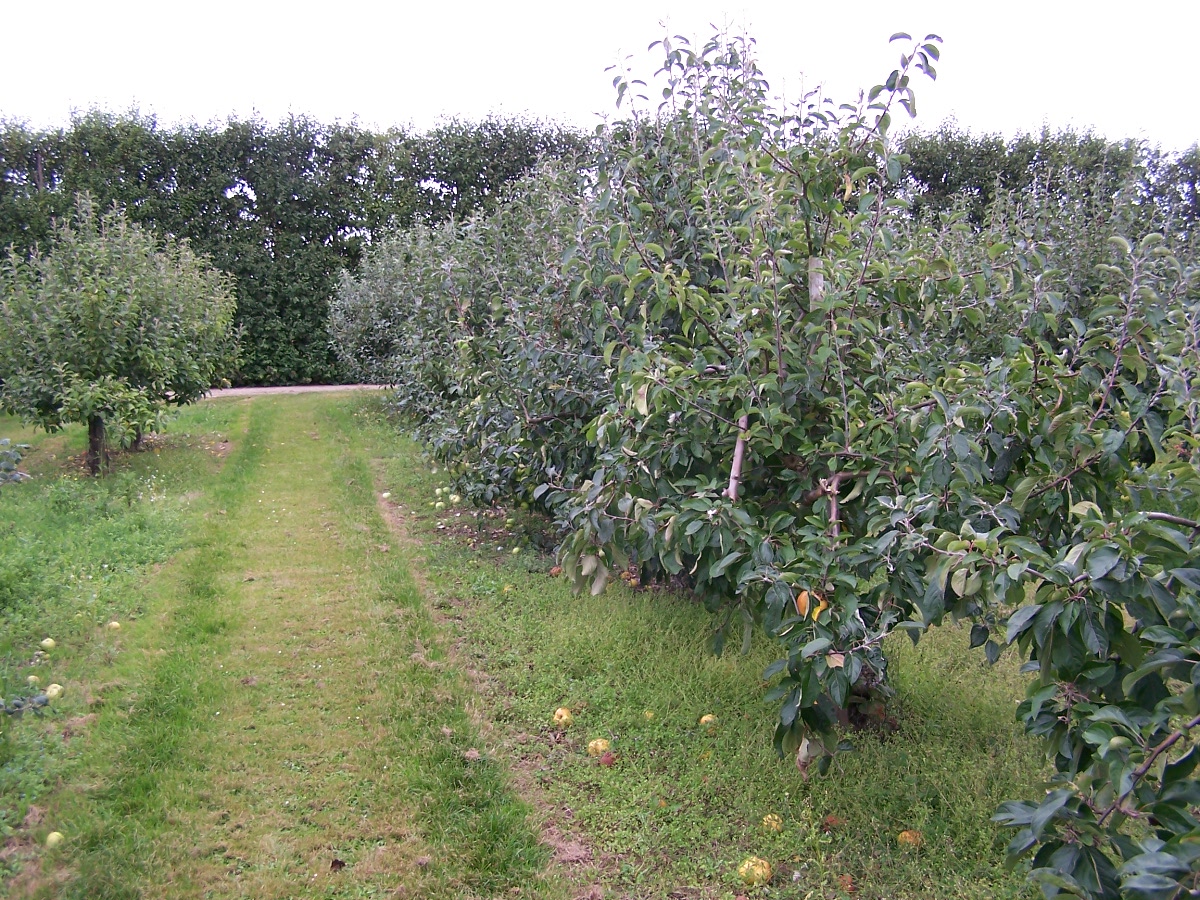 You probably envisage a bucolic scene of rolling pasture, with rows of huge Bramley apple trees dripping with fruit. Or perhaps part of a country estate, ancient trees pruned by generations of Head Gardeners to provide fruit for the house. While these are the grandest forms of orchard, it is perfectly possible to have a very small orchard in a normal garden or allotment – and what’s more, the decision process involved applies to everyone planning to plant top fruit, whether that is 3 trees or three hundred.

The word ‘orchard’ is thought to derive from the Latin hortus (garden) and the Old English geard (yard). As with so much of fruit growing, it is thought that it was the Romans who introduced fruit growing a large scale into the UK. Although orchards seemed to have fallen into decline once the Romans left, the traditional skills involved survived within monasteries. Many of these were destroyed by the Reformation of Henry VIII, but the king did have his appointed fruiterer Richard Harris establish orchards at the royal grounds in Teynham in Kent. Orchards then became the preserve of the aristocratic nurserymen such as John Tradescant, who collected and preserved ancient varieties as well as introducing newer varieties from France. Orchards were also well suited to the small-scale mixed farming which was prevalent throughout the UK up until the 1950’s, and many examples can still be seen throughout the country. An unfortunate effect of the Common Agricultural Policy of the early 1980’s was the conversion of many orchards into more productive farmland. However the last twenty years has seen a slight reversal of this decline, fuelled in part by the increasing interest of schools and community groups in establishing new orchards.

Whether you plan to plant a few trees in your back garden, or join with like-minded neighbours and start a larger community project, the planning and decision-making remain the same. Follow these simple guidelines to ensure success:

1 – Decide which shape and size of tree you would like to end up with.

In most situations, a semi-dwarfing rootstock such as M106 for apples, Quince A for pears and St Julian A for plums, gages and damsons is the best choice. When grown as bush trees, they will reach approximately 3 metres at maturity which means you can pick, prune and winter-wash the trees from ground level. These should be planted at about 4 metres apart (and if you a planting in rows, allow about 6m between rows). The only drawback to these bush trees is that grass management is slightly tricky – as the lowest branches are only about 80cm above soil level, it isn’t possible to easily mow underneath. Either strim carefully a couple of times during the growing season, or else spray off the grass with a herbicide and then keep grass free by mulching.

The other option is to go for a traditional orchard tree on a vigorous rootstock (M25 for apples, Seedling Pear for pears and Myrobolan for plums). They are the best stocks for growing half standard (120cm clear stem) and full standard trees (160/180cm clear stem). These will eventually produce a lot more fruit than bush trees and can be undergrazed if required, but they do take up a lot of space – they should be planted at least 7 metres apart and will eventually reach 7 or 8 m tall. Obviously upkeep then becomes more of an issue, as picking and pruning becomes more arduous for such a large tree and the reality for many people is that the fruit will end up as windfalls. Also bear in mind that the more vigorous the rootstock, the slower the tree will be to start producing fruit. A three year old bush apple tree on M106 will start to crop several years before a 5 year old standard tree on M25.

Once you have decided on tree size, go out armed with bamboo canes and a tape measure and see how many trees you can fit in the space available. Sticking canes into the ground will help you envisage the finished orchard.

It may sound obvious, but there is no point in trying to grow a tree just because it would thrive in your garden or cross-pollinate an existing tree if you do not like the fruit it produces, or if it crops at a time when you are always on holiday.

One of the most common questions we get asked at the nursery is ‘I live at such and such place, which variety of apple will do well in my garden?’ The short answer is - lots of them! Try and think more about the type of fruit you prefer – russeted or smooth skinned apples, cooking apples which fall to a fluff on cooking or those which keep their shape? Would you like to find room for a slightly more unusual fruit such as a gage or a quince, which are almost impossible to buy fresh.

3 – Think about how you would like to use the fruit.

As well as the ratio of culinary to dessert varieties, think of the cropping time. For many people the goal is to have fruit for as long a season as possible, so the majority of trees would be late season varieties which store well. Alternatively, you may want to have a go at producing juice or cider, in which case you will want varieties which crop at the same time so they can be batch processed.

By now you should have a clear idea of the total number of trees you wish to plant, and a shortlist of varieties which will fulfil your specific needs. This is the time to start allocating trees for each space available. Although most fruit trees enjoy similar conditions, there are a few subtle differences which may make one type of fruit more suited to a particular location then another:

Apples – the most tolerant and adaptable of orchard trees, which means they can take less favourable sites. Cooking apples will crop happily in semi-shade.

Pears – need pride of place for sun and shelter to ripen properly.

Plums – wind –resistant, but do flower early, so don’t plant in a frost pocket. Hate to be water-logged, so if you have a sloping site, plant higher up where the drainage will be better.

Cherries – sweet cherries prefer a well-drained site, in full sun. Acid cherries such as Morello as more forgiving and will happily grow in full shade.

There is no right or wrong way to ‘design’ an orchard, if you have followed the above guidelines. Some people will prefer the traditional ‘rows of soldiers’ approach, regimented lines of trees in strict formation. This is certainly the most intensive way to lay out an orchard, and if you are thinking of using light machinery such as ride-on mowers then it certainly makes sense. Trees tend to be planted in rows according to cropping time from earlies to lates, rather than alphabetically, which makes picking fruit much easier.

However there is also a case for a much more ‘relaxed’ approach, planting trees in informal groups, even mixing tree shapes and sizes, which can produce a less productive but more aesthetically pleasing orchard.

Planning and planting an orchard can seem a daunting task, but understanding the decisions involved should give you a clear idea of the way forward. They have been a vital part of our landscape for centuries and planting your own, on whatever scale that may be, will ensure they continue to so.