Annual pruning is one of the most important jobs for the home orchardist, and for several reasons: 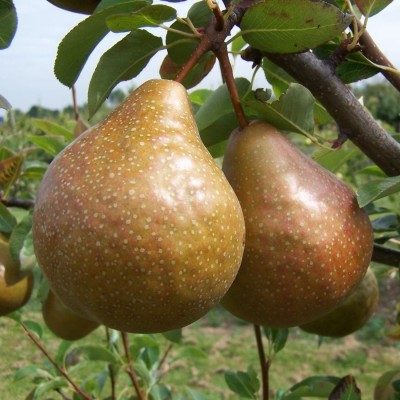 Pruning pear trees is a good example of the Pareto principle. Named after an Italian economist in the late 1900’s, it basically states that you get 80% of the desired effect from the first 20% of the effort. Whilst this might not hold true for some things (20% of a bridge, anyone?), it is certainly the case for pruning. There’s really no need to stress about pruning perfectly – just some basic pruning will be more than good enough. So here are three golden rules which form the essential 20% of pruning knowledge and will provide 80% of the benefits.

1 Prune out dead, diseased or damaged wood. Normally you would do this as part of your winter prune, but can actually be done at any time of year. In fact, it is best to do this as soon as you notice the damage, so if you spot a little canker on the branches, or a limb has been broken in high winds, prune back to a healthy branch or bud as soon as you can. Damaged branches are one of the main entry routes for diseases such as canker, so clean them up and help protect your tree.

2 Remove any branches which are crossing and rubbing. Not only will the bark become damaged, allowing disease to enter, but it is also a sign of congested growth. Thinning branches out will give better air circulation and improve the health of the tree and the quality of the crop.

3 Remove any branches growing into the centre of the tree. For most fruit trees, we are aiming for a nice open centre, almost like a wine glass. This again allows better air circulation and sunlight to get to all the fruit. Young pear trees in particular are prone to growing in a narrow, upright fashion until they broaden out with age, so for pears this step is probably the most important.

Pruning a young pear tree (up to about 5 years old), is generally the same as pruning for apples. The main pruning should be carried out in December or January, and you first need to carry out the 3 essential steps outlined already. Once that has been done, the main task is to try and form a nice balanced open shape. Young pear trees tend to grow in quite a narrow, upright form, so it’s good to prune back the branches by about 25% of the previous season's growth and always prune to a bud on the outside of the branch. This should get some outward growth forming. Some buds may break and grow back into the centre – persist and prune them out again the following winter.

Once a young tree has achieved a nice balanced framework of branches, it's time to slightly adjust the pruning regime. Up till this point the pruning has been the same as you would carry out for apple trees, but I prefer to start to increase the importance of summer pruning for pears. This is because pears are notoriously slow to start producing fruit – ‘pears for your heirs’ is the saying, and it can be several years before newly planted trees begin to crop. Summer pruning encourages the tree to put its energy into producing fruit rather than vegetative growth, so speeds up the process of producing fruiting spurs. This was originally discovered by a French horticulturalist back in 1898 by the name of Lois Lorette, and is known today as the Modified Lorette system . All you need to do is prune back any fresh new growth leaving just one new leaf in the middle of August. You’ll not only keep the size of the tree in check, but encourage the heaviest possible crops in the shortest possible time frame.

If you have a tree that has maybe been neglected or has gotten out of hand, the best advice is to try and take things slowly. Don’t try and hard prune the whole tree in one go. Depending how hard you prune, at worst the shock can be enough to kill the tree, but at best you’ll end up with lots of weak regrowth so the tree will resemble a hedgehog. Hard pruning in winter tends to encourage ‘water shoots’, the plethora of vertical non-productive growth which can take a long time to get back into shape. Instead, start with the three essential steps (always!), and then reassess. Aim to prune the tree back into shape gradually over the course of 3 or 4 years, pruning back 25% of the tree hard, and leave the rest alone (or at most a very light prune). The next winter, take another quarter of the tree back hard. Done this way, over a long period of time, you shouldn’t have too many problems with water shoots – if you do, rub out the young shoots as soon as they start to appear in Spring.